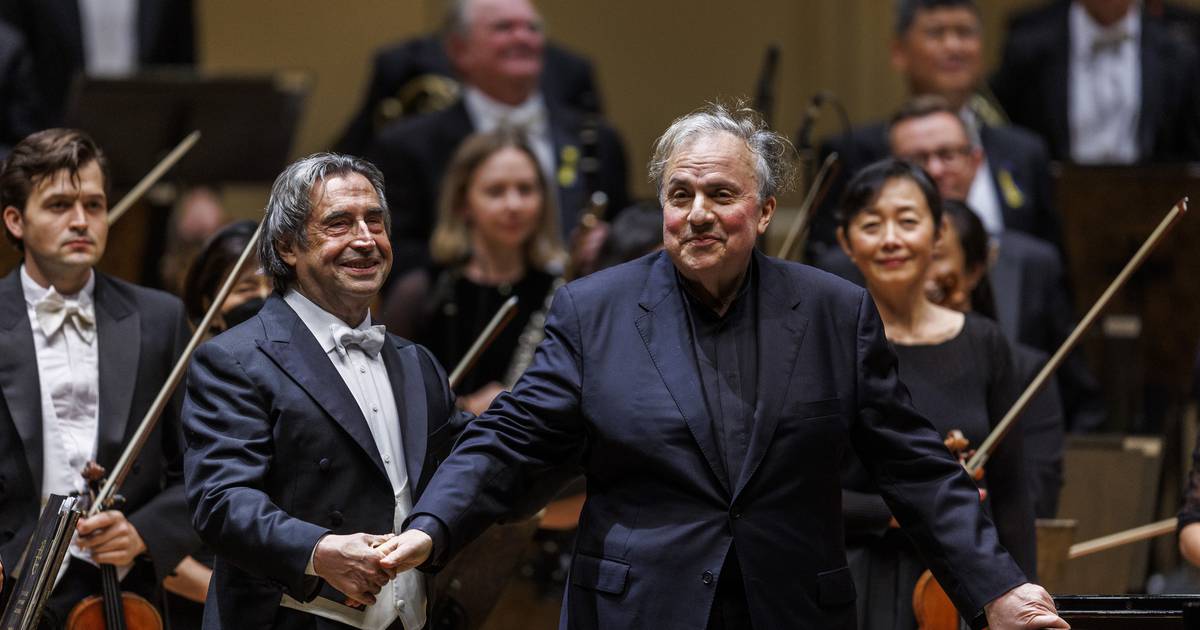 Opening Night makes a great sound no matter who is listening to it.

Maybe it was the fall chill, back-to-school blues, or something else entirely. Whatever the reason, the 132nd season of the Chicago Symphony Orchestra opened on Thursday with much less fanfare than usual. Four major players and several section musicians were missing from their stations – almost unheard of for an opening night – and there was a particularly thin crowd around the Symphony Center. As surveyed from a perch in the lower balcony, the orchestra hall appears to be less than half full.

Even the non-evening soloist Yefim Bronfman clearly could not fill the seats. Nor is it likely that this was CSO’s last opening night with music director Ricardo Muti, who steps down at the end of this season.

A certain diminutiveness was guaranteed, but Bronfmann’s eloquence, less known about Johannes Brahms’ Piano Concerto No. 1, was proof that one need not speak aloud to captivate a room. His foray into pathos-rich themes – usually shocking when the orchestra swung away to reveal the piano, practically disorganized in its vulnerability – seemed inevitable, even laissez-faire. Too. And the second movement Adagio? Even by Bronfman’s astronomical metric, Thursday’s text was something special: weightless, reverent, honest. This was enough to make some CSO players break their usual poker faces while beaming warmly at the pianist from behind.

Brahms offers plenty of opportunities for soloists to rip keyboards. Goodness knows Bronfman has seized them in the past. But even she resisted pounding her way through those moments, as if feeding the energy across the room. He played his solo passage with the sympathies of a chamber musician – not as a high-throated soloist, not as one of two courageous interlocutors, but as the voice of an orchestra, telling the same story. was.

If Thursday’s performance is any indication, the keyboard’s autobiography turns out to be sweet. His touch has lightened since his statuette is another of Brahms – a Bronfman calling card – here in 2015, also with Muti. He is no longer “Bronfman the brontosaur”, as Philip Roth memorably wrote in “The Human Stain” 20 years ago. Maybe, in this repertoire, he knows that both of his hands don’t have to milk all the sounds of a concert when his heart moves.

Muti and the CSO ended the deal with Bronfman striking a great deal – with one notable exception. In the middle of the first movement, Muti turns to the violin and swings his arms into the fast windmills, moving at a tempo that took the pianist by surprise. (it is not first time conductor has appeared Wrestling the wheel off a solo artist During a performance.) But Bronfman, a perfect pro, matched Muti well after a couple of on-the-fly adjustments. Bronfman didn’t take his seat again for an encore – who then needed the brahmins? — but he and Muti were clearly made during their extended bow, each mischievously and graciously trying to persuade each other to accept more compliments.

Muti’s tenure at the CSO resists easy generalizations, but it’s an undeniable crown jewel: He’s dusted off dozens of 19th-century works that were either never heard or rarely heard in America, the latest Samuel Coleridge -Taylor’s “Solem Prelude,” performed Stateside for the first time. The unpublished orchestral score was “rediscovered” in the British Library.

“Solem Prelude” is pretty much what it says on the tin: a 10-minute curtain-raiser cast in a slow B minor, which resolves to shine B major by the end of the work. But what happens in between makes one wonder why 24-year-old Coleridge-Taylor – in the midst of a hugely productive period when he wrote the work for Britain’s Three Choirs Festival in 1899 – was sweating under a deadline. Muti and CSO delivered a spirited and thorough performance, but even this dream team couldn’t completely replace the more awkward variations of “Prologue”. (The better attention to the balance between the instrumental sections could have made its reception even sweeter.) It’s not Coleridge-Taylor’s most inspired work, but even this middle of the road work is anthem and decadent. – Yet a worthy addition to any orchestra’s instrument kit.

Thursday’s slack slowed somewhat after intermission with Tchaikovsky’s Symphony No. 2, once (and still occasionally) for its use of Ukrainian folk songs dubbed “The Little Russians”. Those tunes were never far from Tchaikovsky’s sonic sightlines, but Russian symphonists probably first heard them up close in 1864, when they recorded for the summer at an estate in Trostyanets, 20 miles from the modern Russian-Ukrainian border. Later, Tchaikovsky would spend even more time at Kamyanka in central Ukraine, where he wrote much of the Second Symphony.

For Ukrainians, the “Little Russian” moniker has always done smart. Now, it cools to the bone. The Trostyanets became an early punching bag in the Russian invasion, Tchaikovsky’s former estate, and a nearby statue of the composer both permanent damage, Kamyanka, like many Ukrainian cities, is threatened by a nearby battlefield.

Muti, usually doesn’t shy away from commenting on stage from moment to moment, let the selection of the CSO for the job speak for itself. His recent interpretations of Tchaikovsky’s major symphonies are not afraid to take risks on the backs of those warriors. In the low-performing Symphony No. 2, he was less daring here. Little lightness was found in Thursday’s performance, even in sections where the orchestration practically dances off the page—a “serious prelude” to an unexpectedly solemn symphony.

But here’s the surprise: it didn’t happen No Work. Whether he meant it or not, Muti’s interpretation dismissed the symphony as a virtuoso of folk material, as did indeed 19th-century Russian audiences. After all, behind the tunes are a proud and brave and dignified people. I have yet to hear an opening for the fourth movement—which preceded Modest Mussorgsky’s “The Great Gate of Kyiv” two years before his suite “Pictures at an Exhibition”—as scene-setting and on Thursday Night. As gorgeous.

Tchaikovsky’s early symphonies, on the other hand, may seem lighter than his later work. But as in that moment, as well as the second movement as Andantino marizale demonstrated, there was flesh on these thin bones. A seven-minute-or-so swell that manages to be both good-natured and martial, the Andantino may be one of the symphony’s fastest movements. Not so on Thursday. Muti took the tempo molto komodo, somewhere between a march and a pastoral – soldiers slow to marvel at a land they have sworn to protect. Sure, it could sound sleepy in those moments when the movement’s internal motor was laid bare. But when the striding theme was picked up by the entire orchestra in a Fortissimo Tutti, how long did it take for its poise and seriousness to get there.

Right here, right now, it is very easy to present a narrative on this symphony. Obviously, I’m to blame here. But life doesn’t end at the double doors of the concert hall as much as we wish we could shed its crushing weight. It was a symphony number 2, I wish Kamanka could hear.

Hannah Edgar is a freelance writer.

Shania Twain: I used to be contact and go along with...