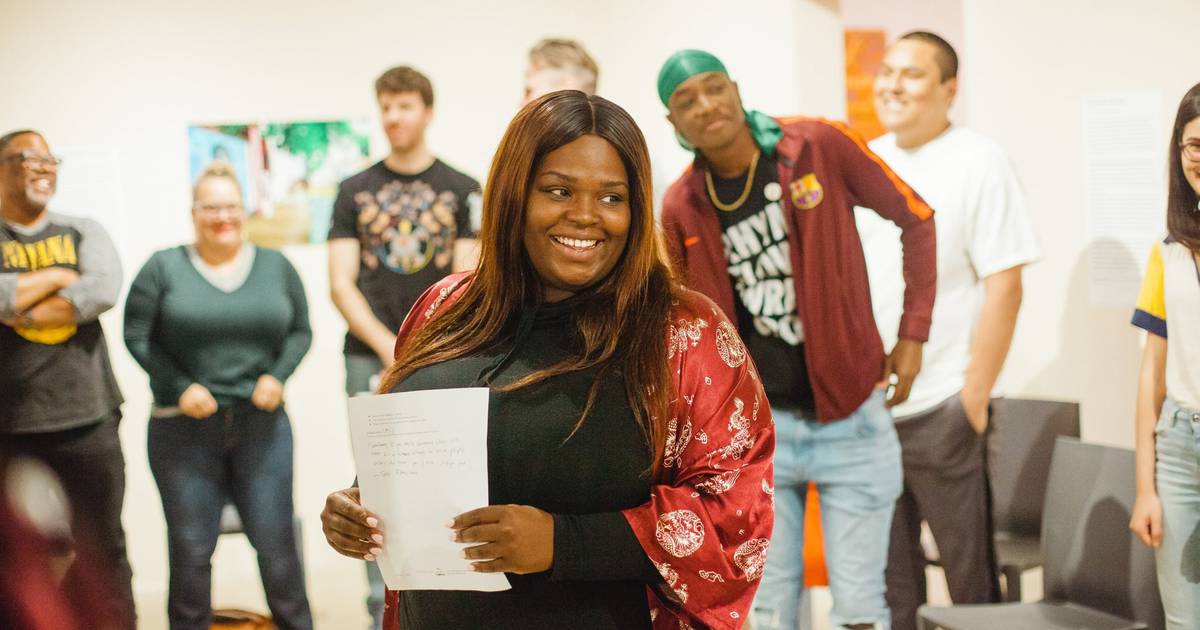 Five years ago, the nonprofit Illinois Humanities asked state residents to imagine a world without mass incarceration, a city without prisons.

This initiative to think about criminal justice as something more fair and equitable resulted in an art exhibition called “Envisioning Justice”. School of the Arts Institute Sullivan Gallery in 2019. The multimedia exhibit featured the work of commissioned artists, activists, residents of South and West Side neighborhoods, and youth at the Cook County Jail and Juvenile Temporary Detention Center.

“This exhibition was meant to be the culmination of two years of work, but what we heard during that exhibition was ‘this is excellent,'” said Tyris Williams, program manager for “Envisioning Justice.” “This place felt so sacred and special, we encouraged (Illinois Humanities) to continue ‘imagining justice.

Illinois Humanities continued the work and expanded the scope with “Envisioning Justice RE: Action,” a program that inspires the arts and humanities to think about alternatives to the permanent injustice of mass incarceration. Williams said that while the work is not new, the approach they are taking is.

“We’re hoping that these people-to-people conversations will be a little different from the event and policy that you can clearly engage in,” Williams said. “It is important for us to be in rooms with shared context. Bringing people together for a shared experience of an art work or exhibition or film, all of these things create an access point for those who are not already involved in the conversation. And for those involved in those conversations that have to be brought together. It levels the playing field when you have that shared experience from which you can start these conversations. ,

Shifting from a major Chicago focus, Illinois Humanities took the initiative statewide and awarded 28 grants of $1,000 to more than a dozen individuals and organizations to help build private and public free events/projects that “envision justice RE.” : action”. The virtual art exhibit features 14 projects with prompts for the public to engage with the causes, effects and alternatives of the current penal system through the lens of visual arts, creative writing, and films. Hints step-by-step on those things. There are step by step instructions that people can do on their own or with groups to further engage with the subjects in the projects. In-person community events are planned in Chicago, Carbondale, Aurora, East St. Louis, Bloomington, Champagne and Decatur.

“Some of the people who applied are going to host their family members. Some people are going to host a small community group that has been tapped into,” Williams said. “All programs vary in scale, so it’s bringing people together on the RE:Action site through these activities in a number of ways.”

For example, a charity in Carbondale will host a free, public music and art-making event this month, inviting guests to use Antonio Burton’s sign, “to shape the mind“To uplift the experiences of children growing up with parents who are currently or formerly imprisoned.

Meanwhile, a re-entry program in Champaign will host a free, public event at the Champaign Public Library, which focuses on the story of Reynaldo Hudson, who gained his independence after 37 years of service.

Additionally, the Chicago Torture Justice Memorial, an advocacy collective, will host a panel discussion at the Chicago Torture Justice Center, which will be followed by a tour of the site at 63rd Street Beach – the site of the important Gerald Reedwho served nearly three decades under a life sentence reduced by government JB Pritzker in 2021 amid revelations of torture by Chicago police.

“There’s so much conversation to be had, that’s why we’ve gotten to the point where we’re imprisoning people and criminalizing them at such disproportionate rates,” Williams said. “There are issues of poverty and education and class, race, gender, there’s a lot of conversation within that and that’s very evident in what’s featured on the RE:Action site.”

The Envisioning Justice Program has awarded more than $400,000 in grants to justice-focused arts and projects throughout Illinois since 2017—both inside and outside carceral facilities.

Williams said the organization hopes that people who interact with the online activities will also upload their responses and feedback to the RE:Action website, so that others can see and give feedback, a group of people who are creating who are sharing their views on the issues and topics covered. in the show.

“We have received funding from one of our long-time funders, the Art for Justice Fund, to maintain a five-year grant toward ‘Envisioning Justice’,” Williams said. “So we’ll stick around because that’s something we really value and what we’ve heard from our partners that’s most valuable are the resources we’ve been able to provide them with to do their jobs. Illinois Humanities We are not an advocacy organization, but what we can do is advocate for new ideas, advocate for new perspectives, and advocate for new platforms for people to share how they imagine justice.

More about the work in the “Envisioning Justice RE: Action” exhibit by Illinois Humanities envisioningjustice.org/exhibitions,

Do not lookup: Shut encounters of the catastrophe film type