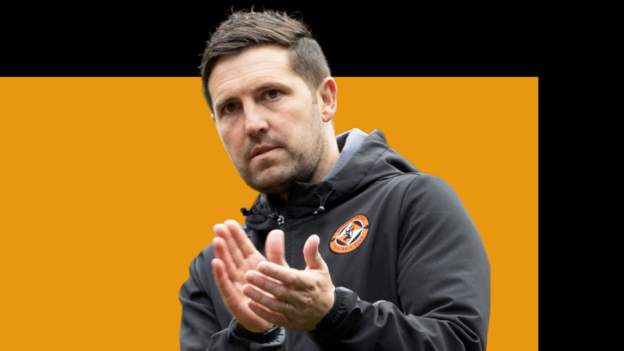 Liam Fox has been appointed head coach of Dundee United after a two-year deal as caretaker boss.

Fox, 38, stepped down on a temporary basis in the wake of Jack Ross’ dismissal after a 9-0 loss to Celtic.

“We’ve made some small steps over the past few weeks, and now it’s about getting back the winning spirit,” Fox said.

Tangerines host St Johnstone in their next Scottish Premiership game on 1 October.

Fox previously coached the first team at Heart of Midlothian and assistant manager with Livingston before joining United as an assistant coach last year.

In their three matches in charge, United defeated Livy in the League Cup, drew with Motherwell and lost to Rangers.

“I look forward to putting a team in the park that supporters can be proud of,” he told United’s website.

“I know how much the supporters of this club crave success. There is real potential and quality in this group of players.”

And sporting director Tony Asghar said: “Liam was clear in his interview with the board how he plans to improve short-term performances and results as he has set up a coaching plan to allow Dundee United to return to our long-term strategy. and prepared a strategic plan.

“I have no doubt that this coaching team will bring the much needed fresh and innovative coaching and game model to Dundee United. The club will soon add another assistant head coach to complement Liam’s coaching staff.”